Split Croatia has many beaches that are located on the northern and southern part of the city and those beaches range from sandy, rocky and pebble types of beaches!

Photo by Oliver Sjöström from Pexels

We will mention the most notorious ones and a bit less known ones, but very small and remote ones are up to your explorer soul to find in Split and even on other Islands thru the Croatian riviera, we are not stopping you!

If you are someone who loves to surf and big waves like in Australia, Croatian beaches are not for you then, if you are someone that loves calm and turquoise sea, with this article you will know where you need to go!

All of these beaches are accessible by boat transfer from Split.

We will first start with the southern part.

Best beaches in the South of Split: 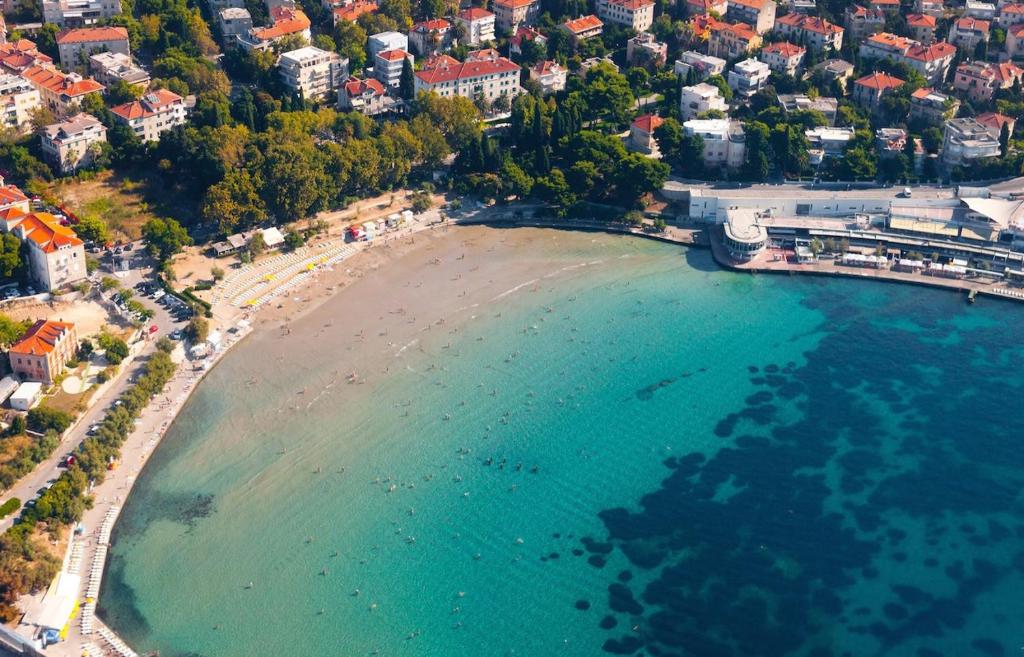 By far the most popular beach in Split which is always a hotspot for the most popular water sport called picigin, where the main goal is to keep a, tennis sized ball always in the air, and at the same time try to make the most acrobatic jumps possible to “save” the ball from dropping in the water.

Bačvice beach in Split is a perfect place to spend the day with your family.

Nice café bars occupy almost every beach in Croatia, so its not shocking when you will find them, even sometimes restaurants that serve both as café and restaurant!

Close to Bačvice is another small pebble beach which attracts also visitors but if you don’t like big crowds, maybe its not for you, due to its limited size there can be a lot of people.

The next sandy beach is called Firule which is also serves as the name for the neighbourhood, this one is bigger in size then Bačvice which makes it also great for a nice family outing.

Café/clubs like Dvor and Mythos are positioned so that while drinking coffee you can enjoy the beautiful view of the Croatian sea.

Further away around 20 minutes walk is another beach called Trstenik which is also a pebble beach with a very nice promenade perfect for walking during the autumn or spring.

Žnjan beach is a old/new beach currecntly under cunstruction, soon here you will also be able to enjoy the sea and the sun while very close to the beach you will be able to find restaurants and cafes, along with a sports facility as well!

Next one is Duilovo, which is specific because it allows dogs! So don’t be afraid to get some Penalties, you dog can enjoy the Croatian sea along with you!

Before talking about the beach, what is Marjan?

Marjan is a hill overlooking Split, with 178 meters of elevation it is covered with a Mediterranean pine forest and it is either surrounded with the sea or the city, making it when you reach the top, a unique site and the view is truly remarkable!

Now that you know what is Marjan lets talk about its beaches!

Marjan beaches are usually less crowded but don’t think that makes them less interesting, first beach (if you are going by foot from the West) is Ježinac beach which will take you around 15 minutes if you are walking, the beach has pine trees which offer a nice shade for the high temperatures which are a common occurrence especially in July and August when temperatures can reach up to 30C or even more.

If you really love to be alone and/or love night swimming, the beaches Kaštelet or Obojena are for you.

Then you can find Kašuni, this beach is a “3 in 1”, it is a combination of rocky, sandy and pebble, with beach bars where you can enjoy cocktails while relaxing on the deck and taking in the views.

Last but not least, is Bene beach, with a pine forest, and not just that!

If you are a sports person, then this beach is for you, here you will find a tennis and a football court, just keep in mind the beach is a little bit further away from the centre so a taxi or a rent a car would help you reach it faster, or if you like walking, no one is stopping you!

Now that we mentioned all of the beaches in Split, we will talk about a few other ones that are definitely worth mentioning but are not located in Split.

We will talk about beaches located on the Island of Vis which is mostly popular thanks to its neighbouring island, Biševo where the Blue Cave is located, you can also get a Blue Cave boat tour to visit the famous and mesmerizing cave.

Another place we need to mention before starting to talk about Vis is also the Blue Lagoon, as the name says its a lagoon that is located in between 3 islands, 2 small islands called „Krknjas Mali“ and „Krknjas veli“ next to a much bigger island „Drevnik veli“.

You have a lot of options for all the tours, you can get a Blue Lagoon boat tour from Split,a boat transfer to Blue Lagoon, or even rent a boat in Split and go drive there yourself and be your own captain, or one of our skippers drives and you enjoy the sea and the sun!

It would be shocking to not mention, literally the best beach in Europe by Telegraph in 2016.

The beach we are talking about is Stiniva located in Vis, west of “Mala Travna bay”.

What makes the beach beautiful is its 2 cliff like rocks that are only 4 meters apart from each other!

Stiniva is a pebble beach with a bar/tavern literally a few meters from the sea, so you can, as we already said with every beach in Croatia, enjoy a cold refreshing drink while listening to the waves and enjoying the view, and since the cliffs are pretty high, one part of the beach is always In the shade.

One thing there is to note about Stiniva is, its accessibility. It is not accsasable by car only by foot, renting a boat or even a boat transfer that will just drop you off there and pick you up again when you desire.

You still can arrive by car but you will need to park it close to the street or on the sidewalks, since there are no parking places for cars, after that there is a walk down the trail to reach Stiniva, which will take around 20-30 minutes depending on how fast you are walking, but trust us, the walk is worth it,as well as to go back.

Srebrna in Croatian translates to “Silver beach” very close to it Is a little village of Rukavac with a population of approximately 100 which is pretty small.

Srebrna beach, there is not much to say about the beach because its also as beautiful as any other beach in Croatia, it is a pebble beach and the turquoise water along with the pine forest very close for the shade also makes for a great beach for a family outing, but keep in mind that you need to bring food and drinks with you because there are no restaurants or cafes, the closest one is about half a kilometre away, its that far away but if you are enjoying the sun and sea, no one wants to stop it and go walk again one hour after you just arrived.

If you would like to have a café close, better option is to visit Tepluš, a beach that is closer to Rukavac and has a Lounge/Bar with fish and wine.

Stončica beach is the closest beach to the city of Vis, if we were talking about the popular ones.

The exactly closest one is beach Prilovo which is in the center, you can reach it very fast already after you leave the ferry you arrived in, a 10 min walk and you are there, but the beach is always packed with tourists and even local ones because its right in the center.

Few more reasons why you should choose Stončica, it is really shallow from the shore making it the most family friendly out of all of the beaches we mentioned and not just that, it has activites such as beach volleyball, snack bars and a cafe bar, along with it specific positioning of trees soroudning it so there is alway shade, to avoid the hot sun in the middle of the day!

Another sandy beach on Vis which attracts a lot of boaters due to its wider size compared to other beaches, it is also shaded with pine trees and a little bit shallow as well, which is good for families.

Keep in mind that there is city of Milna on Brac as well, and there is also Milna village on Vis and Milna beach!

There is no shade but you can rent beach chairs and sunahdes. Its close to the road but not a high speeding road, cars are parked on the road for people that want to visit the beach so you dont need to fear any speeding cars next to you while you relax in the sun, because there is not much road to speed on actually when cars are parked on it. There is a very small parking avaliable close by but with very limited spaces.

And the last beach on our list is called Zaglav, which is 20 minutes away from Milna beach in the direction of already mentioned Rukavac. This beach is not accessible by car but you can reach it with paths leading from Milna or Rukavac, depending from which direction you are coming from.

Same as in Milna there is no shade but you can rent out chairs and sunshades, there is one restaurant and beach bar, which makes it specific is the combination of sand and pebbles, upper part of the beach consists of pebbles while lower part consists of sand and the sea floor is made out of sand.

So as you can see, Croatia can offer a lot of beaches where you are guaranteed to have a wonderful time!

ZAGREB, 22 January (Hina) – A project by the City of Split and its Tourist Guide Association has received a major acknowledgement...

The post Split project “Children – the guardians of our heritage” draws praise from World Federation of Tourist Guides first appeared on Croatia Week.